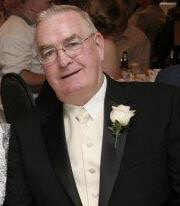 Peacefully at Grey Bruce Residential Hospice on April 7, 2015 in his 74th year. Born and raised in New Victoria, Cape Breton he was the son of the late John and Rita (nee Connors) Brown. Beloved husband of the late Bernice Brown (nee MacQuarrie). Russell was also predeceased by his brother John â€œJackieâ€ Brown and son David (Karen) Brown. Will be dearly missed by his children Russell (Sarah) of Brampton, ON, John (Sherri) of Georgetown, ON, Kevin (Rhonda) of Owen Sound, ON and Kelly (Jeffrey) Lohnes of Calgary, AB. Russell is survived by his sisters Shirley (Paul) Sechler of Pennsylvania, Margie (Frank) Bridge of Port Perry, ON and Zelda Mathieu of Rigaud, QC and brothers Brian (Patsy) of Loch Lommand, NS and Cyril (Jocelyn) of Oromocto, NB.  Loving Papa to Russell, Mitchell, Connor, Toni, Carolyn, Riley, Emerson, Parker, Jack and Danika. Russell will be greatly missed by his extended family and friends. By request, no funeral service will be held. Interment at Meadowvale Cemetery, Brampton on Saturday, May 9, 2015 at 11 a.m. Special thanks to the staff at Grey Bruce Residential Hospice for their wonderful care and compassion and to the many VON nurses who cared for Russell over the past several years. Donations to Grey Bruce Residential Hospice would be appreciated by the family. Arrangements entrusted to Grey Bruce Cremation and Burial Services.