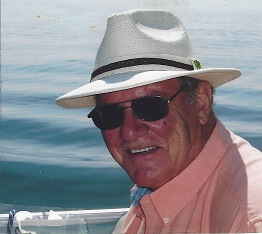 Wayne Peachman of Kincardine passed away peacefully at the London Regional Cancer Centre on Tuesday, February 7, 2017 at the age of 75.   Beloved husband of Mary Jane (Jane) Mayes-Peachman.   Loved and will be missed by step-children Todd Wingate of White Rock, B.C. and Larissa Wingate Reynolds and husband Steve and daughter Samantha of Carnation, Washington and son Carson Edmundson of Summerland, B.C.   Wayne will be missed by Louise and Dean Edwards and children Darrin and Jacob of Barrie and Len and Johanna Miller and children of Oslo, Norway.   Remembered by his brother Brian and wife Vicki of Oakville.   Wayne was born in Bradford and raised in Barrie.   In his early years he was a stock car racer and one of his venues was the former Barrie Raceway.   He moved to Kincardine in 1976.   He and business partner Paul Lawless originated the former Glen Huron Ford (now known as Montgomery Ford) in Kincardine.   Wayne moved on to own and operate Wayne Peachman Chev-Olds.   He also had a few years as a restauranteur and created and operated â€œPeaches by the Parkâ€ fine dining restaurant.   He was one of the executive members of the original formation of the Kincardine Chamber of Commerce and served in the Rotary Club. Wayne was also a lifetime member of the Canadian Pool League for many years.   Wayne was very well known with always a great sense of humour and will be truly missed by many.   A Celebration of Life will take place at the Royal Canadian Legion, Kincardine on Sunday, February 19th at 1 p.m. in the auditorium.   Online condolences may be made at www.greybrucecremation.com.