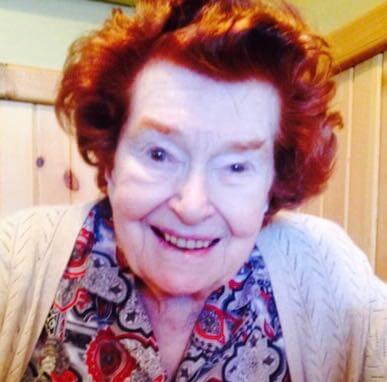 When the Chi Cheemaun leaves the Owen Sound harbour for its annual trip to Tobermory this year it will be missing one of its most enthusiastic passengers. Since 1994 Jay Adamson had rarely missed a spring or fall cruise.

Jay passed away Saturday, March 27th, 2021 in her 98th year at GBHS. Although she lived a long and very good life, she was not able to achieve her wish of receiving a congratulatory letter from the Queen when she reached her 100 year milestone. A feisty Scottish lass with flaming red hair and a wonderful smile, Jay charmed all who met her. She was fiercely independent and strong willed to the end and when doctors would count her down and out, she would get a twinkle in her eye and do whatever they said she wasn’t capable of.

Jay emigrated to Canada from Scotland with her parents David and Bessie Adamson in the 1960’s. Over the years she spent time with friends in Owen Sound and she eventually made the decision to move here permanently. Having grown up in the port cities of Glasgow and Edinburgh, living again on a harbour was a perfect fit. Her window in her apartment in St. Francis place looked out over her beloved Chi Cheemaun and every night she would say goodnight to her.

Jay will be greatly missed by the Keeling family and Janice Noble, who is part of the Owen Sound Transportation family as well as by her good friend Lorna Rouse and Bruce and Ruth Stanners who shared with Jay her love for Scotland. She will also be missed by the crew and staff of the Chi Cheemaun, especially Captains Kerry Adams and Rob Schreiber, who always welcomed her. She had a deep affection for all the people who took care of ‘her’ ship and its passengers.

Her family of friends would like to thank all the wonderful VON Assisted Living Program staff who provided exemplary care to Jay at St. Francis place and the paramedics in the EPIC program who, like the VON staff, became her friends while providing care.

And finally, a thank you to the staff on the 6th floor at the hospital where Jay spent her final days in a locked down ward and while she did not have Covid, she found herself under the blanket quarantine on that floor. The staff cared for her with kindness and patience and did their best to allow communication with her friends. In the end, she was not alone but with one of her favourite nurses who held her hand.

A Celebration of Jay’s Life will be held at a later date. Jay’s final wish was to donate her body to the University of Toronto, Faculty of Medicine, Willed Body Program as her Mother had done in 1980.  While that has not been possible for her perhaps her wish to do so will serve as an inspiration to others to consider the same.